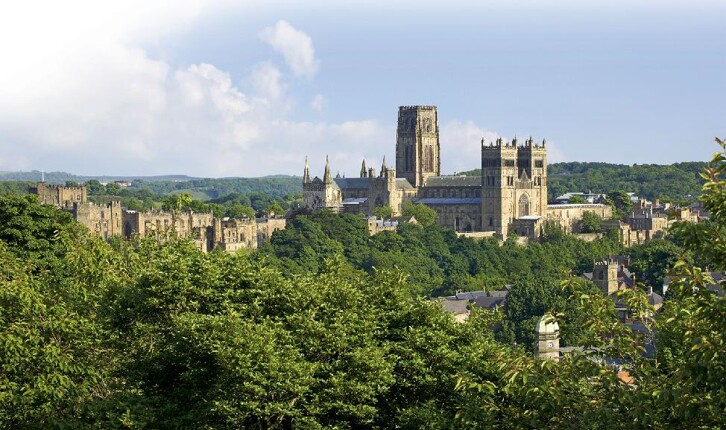 Durham World Heritage Site is a monumental symbol of the Norman Conquest of England. Moreover, together, Durham Cathedral and Castle reflect the combined secular and religious power that gave Durham its unique political importance under the rule of its Prince Bishops.

The Cathedral and Castle: Symbols of the Norman Conquest

Durham is a fortified peninsula on the River Wear; home to one of Europe's greatest cathedrals and a castle built by William the Conqueror, it was the seat of the Prince Bishops.

The Castle's Norman Chapel (above left), dating to around 1072, is Durham's oldest surviving building. It pre-dates the monumental vaulted Cathedral Nave (above right), renowned as a break-through in architectural technology, by around 20 years.

Durham Cathedral and Castle were inscribed on the World Heritage List because of:

“To be an outstanding example of a type of building, architectural or technological ensemble or landscape which illustrates (a) significant stage(s) in human history,”

"Durham Cathedral is the largest and most perfect monument of ‘Norman’ style architecture in England. The small castral (castle) chapel for its part marks a turning point in the evolution of 11th century Romanesque sculpture."

“To exhibit an important interchange of human values, over a span of time or within a cultural area of the world, on developments in architecture or technology, monumental arts, town-planning or landscape design,"

"Though some wrongly considered Durham Cathedral to be the first ‘Gothic’ monument (the relationship between it and the churches built in the Île-de-France region in the 12th century is not obvious), this building, owing to the innovative audacity of its vaulting, constitutes, as do Spire [Speyer] and Cluny, a type of experimental model which was far ahead of its time."

“To be directly or tangibly associated with events or living traditions, with ideas, or with beliefs, with artistic and literary works of outstanding universal significance. (The Committee considers that this criterion should preferably be used in conjunction with other criteria)”

"Around the relics of Cuthbert and Bede, Durham crystallized the memory of the evangelising of Northumbria and of primitive Benedictine monastic life."

You are in: Home » Learn » World Heritage » What is Durham's Significance?