Heritage is a shared responsibility. What does that mean?

The World Heritage List came about as the result of a general conference of the UNESCO (The United Nations Educational, Scientific and Cultural Organisation) at its 17th session in 1972.

The pharonic temple of Abu Simbel in Egypt was moved in 1972 to prevent it from being submerged by the lake that was to be created by the construction of the Aswan Dam. The relocation of this massive stone temple is among UNESCO's greatest accomplishments.

UNESCO in Action: The Florence Flood and the Aswan Dam

The early 1970s were a time when cultural and natural heritage was increasingly threatened with destruction, both by the traditional causes of decay, and by changing social and economic conditions, including urban development, population growth, and over-hunting.

As such, there was growing public consensus that some heritage was of outstanding importance and therefore worthy of preservation as part of the world heritage of mankind as a whole.

Aerial view of Florence during the flood of 1966. The severity of the flood was a call to action: It raised alarm bells that the world's cultural heritage was vulnerable and too precious to lose. 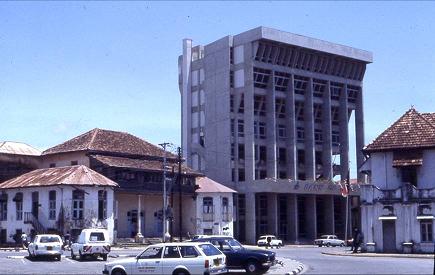 A view of Mombasa, Kenya, demonstrating what happens when the urban context of architectural heritage is not taken into account. The old-world feel of the street with its colonial buildings is ruined by the new concrete building in the centre, which is inappropriate in scale, massing and materials. Many historic cities around the world continue to be ruined by such short-sightedness.

The idea of preserving heritage in its environment was identified by UNESCO as being important; this was almost certainly due to a growing awareness of the wrongs of the common 19th century practise of appropriating and relocating artefacts, and of the fact that many valuable environments, both man-made and natural, were being lost.

Heritage as an Asset

UNESCO was pioneering in identifying that heritage should be seen as an asset, rather than an obstacle in the face of national development. It also recognised that countries needed to take an active role in heritage preservation, and that both public and private entities needed to get involved, making the most of advances in science and technology. Many of these are principles now taken for granted.