The Importance of Bridges in Medieval Times

In medieval times, well-built bridges, which we now take for granted, were rare. Most river crossings were either fords, (spots where the water was shallow), or wooden bridges, which tended to be weak and flimsy.

To build a stone bridge was a major investment and required generous patrons, either political figures or wealthy merchants. In Durham, building bridges was the Bishop's responsibility.

However, because building bridges was a public service, their maintenance was considered a charitable act, like repairing or maintaining a church, and philanthropic citizens often contributed to their upkeep.

The other side of the coin was that because bridges were of such strategic importance, an economic value could be placed on them, and people wishing to cross a bridge, or take goods across, often had to pay a toll to do so. In some respects, bridges were the equivalent of customs points at airports today.

For non-merchants, the toll to cross bridges was the equivalent of council tax: money paid to the authorities to enable them to upkeep public facilities and infrastructure.

This, Durham's oldest bridge, was constructed in 1127 by Bishop Flambard, a man who did much in the way of constructing public 'buildings' in the city. (Much of the Cathedral is also his work.) As a strategic entry-point into the city, it was well-defended by the castle to prevent it becoming a military weak-point.

The bridge was damaged by floods in the fifteenth century and rebuilt by the then Bishop, Langley.

As with many medieval bridges, this one originally had a gatehouse to control the flow of traffic, and enable the bridge to serve as a barrier, not just as a connecting point. This was removed in 1760 when it was no longer seen as important.

The medieval bridge would have been much narrower than the structure that exists today, and cluttered with shops and booths. As the main entrance to the city, it was the ideal commercial location.

The bridge was eventually cleared of its commerce-related clutter, and doubled in width in 1859, to facilitate the flow of traffic. 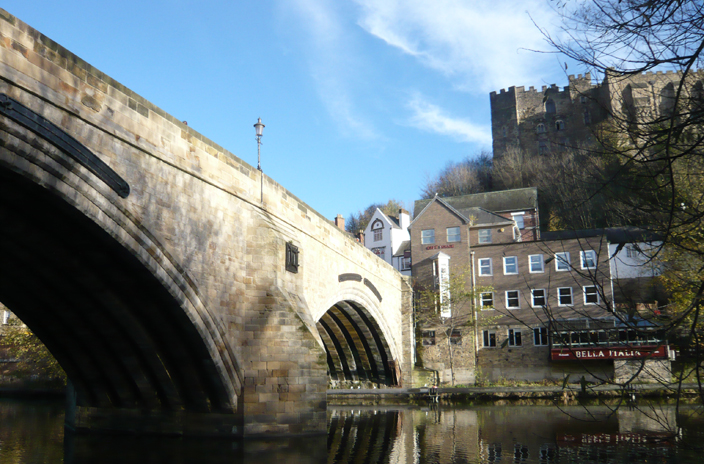 Framwellgate Bridge, with Durham Castle looming over it.

Durham's second oldest bridge was built by another prolific Bishop, Hugh Le Puiset, (also patron of the Galilee Chapel in the Cathedral, and parts of the Castle) sometime between 1170 and 1195.

Historic accounts of Elvet Bridge tells us much about the social importance of bridges. In the early 13th century, indulgences (forgiveness for sins) were being given by the Archbishop of York for anybody who would work on this bridge's construction which was probably more likely to have been reconstruction after the usual threat to Durham's bridges: flooding).

View of the east end of Elvet Bridge, showing the buildings constructed on it. The building to the furthest left still retains the remains of a chapel dedicated to St Andrew.

A Market Street Over Water

Elvet Bridge had a chapel at each end - again this emphasised the importance of bridges, and the fact that that they were seen as landmarks, and important points of departure or arrival. One of the chapels, the one on inner river bank, was funded by a butcher. (The street at that end of the bridge was called Fleshergate.)

Elvet Bridge would also have had gates, forming part of the city's defenses. These were added (or strengthened) in the fourteenth century, when Scottish attacks on Durham were becoming frequent, but were demolished at the end of the sixteenth century – when they were no longer useful.

The buildings remaining on Elvet Bridge are just a few of the many that would have been there – it would have felt like a bustling medieval street, rather than the quiet pedestrian walkway it is today.

The view looking north from Prebends’ Bridge. Compare it to JMW Turner's depiction of the scene, below.

This is probably Durham's most 'visited' bridge, thanks to the views it offers of the Cathedral and wooded riverbanks. In fact, when it was constructed in the late eighteenth century, it was designed with beautiful views in mind.

The current structure replaced an older bridge, washed away by floods in 1771, which was located slightly south, where the river is narrower. By the eighteenth century, building technology had come far enough along for the narrowness of the river not to be the decisive factor in siting a bridge. This was the age of Romantic landscapes - and the exact siting of Prebends' Bridge should be seen as part of an attempt to create a beautiful landscape in Durham. During the same period, trees were planted on the riverbanks in order to complete the desired aesthetic effect.

The construction of Prebends' Bridge at a location that captured fantastic views of Durham Cathedral and the riverbanks has made the view from the bridge the classic postcard image of Durham. This isn't a recent thing - JMW Turner painted the view from the bridge in the 19th century (but used artistic license to show more of the Cathedral, by rotating the building considerably).

You are in: Home » Learn » Architecture » Historic Bridges