The shrine of St Cuthbert today. Until the reformation in the mid-sixteenth century, the coffin of St Cuthbert would have been placed quite high off the ground.

“One of the Most Sumptuous Monuments in all England”

The simplicity of St Cuthbert’s shrine today belies its original appearance, which was ornate.  It is said that just one of the many jewels decorating the shrine would have been worth a king’s ransom.

The base of the shrine was made of expensive green marble and gilded. In the base were four seats, where pilgrims – especially the sick and lame – could kneel to receive the blessings of God and St Cuthbert.

The Cover of the Shrine

St Cuthbert’s shrine was covered with a richly-embroidered cloth, which was raised on special occasions to expose the lavishly decorated shrine itself. The shrine’s gilt cover depicted Christ on a rainbow on one side and Christ as a baby being carried by Mary on the other. At the edges of the cloth were six silver bells, which tingled when the cover was lifted, drawing the attention of people in the Cathedral.

The current cover of the shrine, although not of cloth, is inspired by the description of the 16th century shrine covering above.

Gifts to the Shrine

It was traditional for wealthy patrons to donate valuable gifts to embellish the shrine of an important religious figure, and St Cuthbert received his share. These were placed in gilded and beautifully painted cupboards on either side of the shrine. When the shrine cover was lifted, the cupboards were also opened to display the priceless gifts.

As is the case today, banners would have also embellished the shrine.

Find out the duties of the keeper of the shrine from a sixteenth century account. 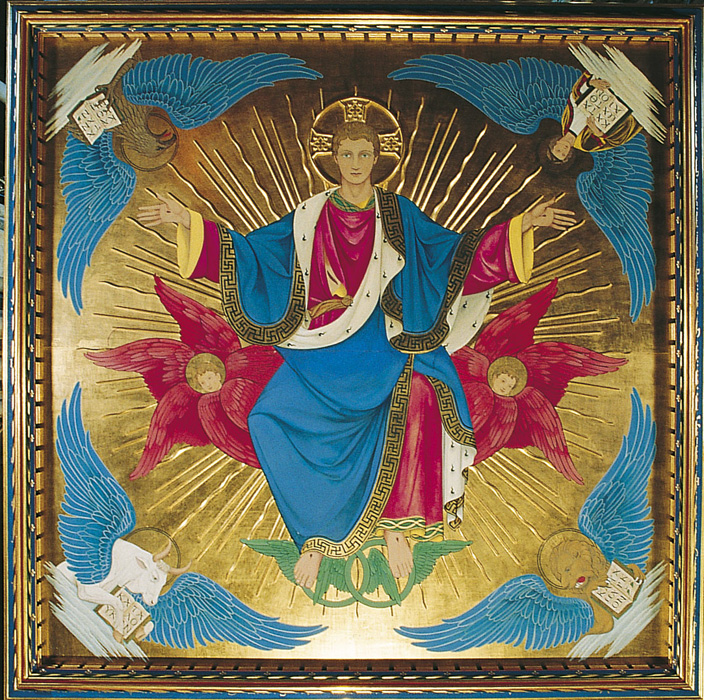 The modern tester of the shrine of St Cuthbert is one of the few indicators of what the shrine would have looked like before the mid-sixteenth century when it was stripped of all its riches.

This statue of St Cuthbert lost its head at the hands of the religious zealots of the reformation, who abhored the veneration of saints.

Destruction in the Late 1530s

Around 1539, Durham Cathedral was visited by the commissioners of King Henry VIII, who came to strip it of its treasures.

An eye witness speaks of the ‘visitation’ of Dr Ley, Dr Henley and Mr Blythman. They brought with them a goldsmith who, when he had taken off the gold and silver and precious stones, climbed up to a chest strongly bound in iron. The goldsmith took a hammer and smashed open the chest.

He found Cuthbert “lying whole with his face bare and his beard as if it had a fortnight’s growth.”

The goldsmith shouted out “Alas, I have broken one of his legs”

Dr Henley called out “throw down the bones”

But the goldsmith replied that he could not do so because the bones were kept together by skin and tissue.

Dr Ley went to the feretory to see for himself, and then told Dr Henley in Latin:

“He was lying whole”

Dr Henley did not believe this and repeated “Cast down the bones,”

“If you do not believe me, come up and see for yourself,” Dr Ley said.

At which point Dr Henley came up and handled him and saw that he was indeed un-decayed.

The commissioners then ordered the monks to move the body to the vestry until the King decided what should be done.

Visitors congregate silently at the shrine of St Cuthbert.