The cloister would originally have had glass in between the stone tracery, so sitting on a ledge daydreaming may not have been possible in the 12th century when they were first constructed. But they were always used for meditation, as well as for reading and writing.

The Function of Cloister

The cloister was an important part of a medieval monastery - it was where the monks would have meditated, studied and exercised. In many monasteries, manuscripts were written in or around the cloister – one of their advantages was that they were roofed but provided ample light. (Most of the interior of the Cathedral would have been much darker.)

The Construction of the Durham Cloister

Built in the late 12th century by Bishop Hugh Le Puiset as part of an enlargement of the monastic precinct in response to the recently-completed Norman Cathedral, the cloister was remodelled to their present form in the early fifteenth century, and the tracery later remodelled again in between 1764 and 1769.

What We Know about the Way the Cloister were Used

We know from the Rites of Durham that on the north side of the cloister, each bay was divided into three studies overlooking the courtyard. Each old monk could go to his study every day after dinner to read until evensong. The studies were made of wooden panelling, with a lattice door to let in as much light as possible.

Opposite each study, set against the wall of the Cathedral, were bookcases containing secular and religious works. (The monks could either read in their study or in the library.)

The cloister screens – which today open to the courtyard – would have had glazed windows.

Detail of a manuscript written in Durham between 1104 and 1115. This is Symeon of Durham's Tract on the Origins and Progress of this, the Church of Durham, now in the collection of Durham University Library. The cloister was probably used for the writing of manuscripts, although this particular example was written about 75 years before the construction of the Durham cloister as we know it today.

The Evidence of a Scriptorium

Manuscript copying was a common activity in monasteries, and although there is no definite evidence of a formal scriptorium in Durham, it is likely that the cloister was also used for this purpose.

Today, the northern side of the cloister is just a long empty corridor. But a close look at the wall beside the door connecting the cloister to the Cathedral nave shows that something has been blocked up. Behind this wall was a little room where monks would have probably kept their book-making tools and the manuscripts while they were being produced.

The Rites of Durham describes the Spendement as a strongly-built room in the cloister where the abbey’s treasures were kept in locked chests. It was also used for books and important documents. There was once a money-counting table inside. 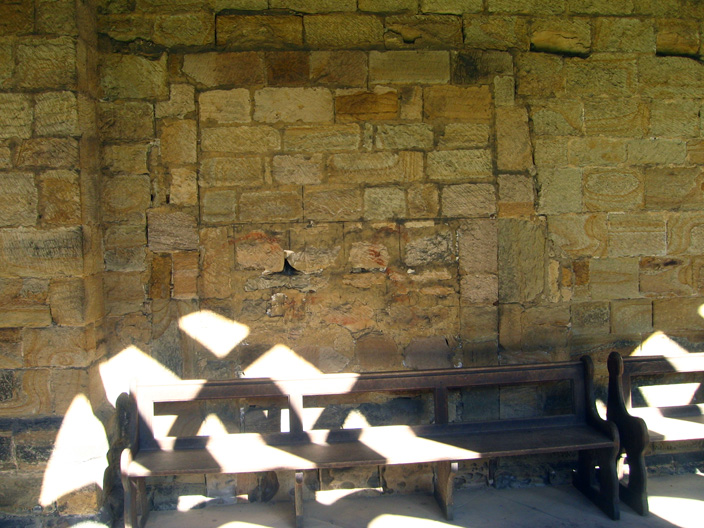 It is easy to see that something has been walled up in the cloister. Judging from the way cloister tended to function and the architectural conventions of the time, it is likely that behind this walled-up area was a recess where writing materials would have been kept.

Did the Cloister Windows have Stained Glass?

Apparently, the eastern side of the cloister had stained glass windows so bright that when the sun shone upon them, from a distance it looked as if a house was on fire. The side of the cloister used as a scriptorium would have probably had areas where the glass was clear – coloured light not being ideal for reading or book production.

View of the cloister. They would have originally had windows, some of which would have had stained glass.

You are in: Home » Learn » Architecture » Durham Cathedral » Areas of Interest » Cloister