Why is Durham Cathedral Architecturally Important?

Durham Cathedral's importance as a piece of architecture is thanks to a number of innovations which revolutionised church-building across Europe.

1. The Earliest Surviving Stone Vault of such Scale in the World

The nave vault of Durham Cathedral is the most significant architectural element of the Durham World Heritage Site because it marks a turning point in the history of architecture. The pointed arch was successfully used as a structural element for the first time here in this building. Semi-circular arches were the type used prior to the adoption of the structural pointed arch — the limitations of which is that their height must be proportionate to their width.

The use of stone ‘ribs’ forming pointed arches to support the ceiling of the nave was an important achievement, and Durham Cathedral is the earliest known example.

What are the advantages of stone ribs and pointed arches?

Pointed arches overcome the difficulties created by the rigid geometry of semi-circular arches by enabling arches of different spans to rise to the same height.

Stone ribs provide additional support to the vault at critical points, allowing the filling to be thinner and therefore lighter. The ribs also help transfer the weight of the ceiling downwards towards to the walls, preventing structural problems.

Thirdly, ribs are aesthetically pleasing to the eye – they become the object of the viewer’s focus, making the roof they support look light and graceful rather than massive and solid.

The two sketches above show the difference between a rib vault and a groin vault. The shaded areas of the rib vault are the key structural elements, while the unshaded areas are fillers. The combination of the pointed arches and the ribs enable greater height to be achieved than in a groin vault of roughly the same size.

Why was the introduction of the ribbed vaults at Durham Cathedral significant?

Any technological advance that would enable the construction of a grander – yet solid – building was an important breakthrough. 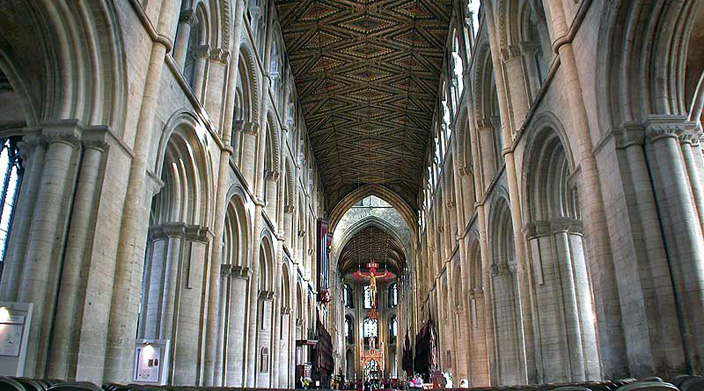 Peterborough Cathedral, England, dating from the early 12th century, is almost contemporary with Durham, but more traditional in its approach to the roof of the nave, which is wooden. It provides an interesting comparison as, apart from the roofing, the naves of both buildings feel similar.

The Cathedral of St Foy, Conques, 1087-1107, France, demonstrates the limitations of the groin vaults used to roof the nave. The nave is extremely narrow, almost like a tunnel -- it was the pointed arches and rib vaults used at Durham that were to enable later buildings to solve this problem - allowing for vaults that spanned much greater widths and soared higher.

What type of roofing would have been used had this been an earlier building?

Groin vaults, which lack the ribs. These are heavier, need more support, lack visual definition and grace, and can’t achieve the same height.

Before that, cathedrals would have been supported by wooden roofs, which had a less cohesive architectural effect, and were also prone to fires.

What was the impact of the ribbed vaults that first appear at Durham Cathedral?

The architectural technology that makes its first appearance at Durham Cathedral was to affect the course of European religious architecture for at least four centuries:

The stone ribs became extremely important structural elements that evolved to form even more strongly-pointed arches. These enabled cathedrals to soar even higher – creating the Gothic style that was to flourish between the 12th and 16th centuries.

From walls with windows to windows with walls

As builders became more experienced, the ribs themselves became one of the main supporting structural elements of the ceiling (it had previously been the walls). With the walls less important as structural elements, it became possible to create much larger windows. This led to the evolution of cathedrals from dark, massive buildings with small windows, to light, airy buildings with more windows than walls.

The choir at the Church of St Peter and St Paul, Bath, dating from the early sixteenth century, with its magnificent fan vaulting, a British architectural tradition. Note how light the structure is - there are hardly any walls, allowing for plenty of light inside the building. This is the result of centuries of architectural development.

What were the main structural challenges that a builder faced?

The sheer weight of a building and the sideways thrust of arches and vaults were often the builder’s greatest challenge – if walls were not thick enough, or solid enough, they would collapse – one of the tricks to building a large stone building was to make sure that the load of the stone was deflected through the building. The structural ribs helped solve this problem.

Was the Durham vault a perfect success?

Yes, in terms of being the architectural solution to an old problem. It showed the way forward, and much of the vault has stood intact for 900 years.

No, because like all pioneering breakthroughs, it needed perfection in part. Some sections of the earliest sections of the vault collapsed and had to be rebuilt. Others needed strengthening, but overall, the solution was there.