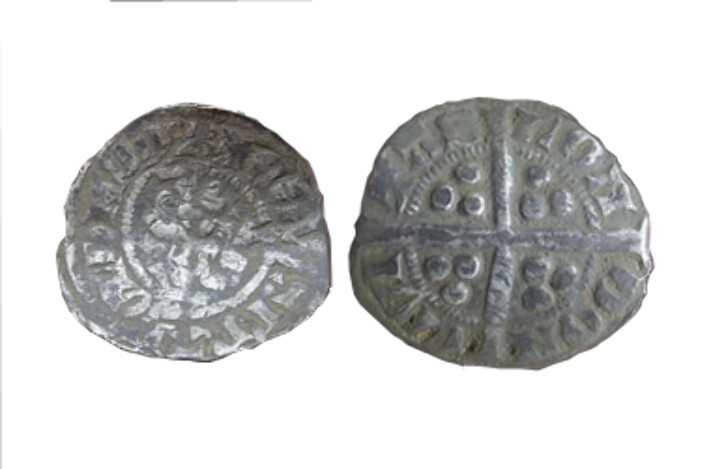 A silver penny issued in 1272 by Bishop Robert Stitchill. This was during the reign of Edward I.  The inscription reads CIVITAS DUREME. (City of Durham)

Moneyer’s Garth attracts a lot of attention because of the red phone and letter boxes outside it – often the subject of visitor’s photographs. But what was the building used for originally?

Today a nineteenth century building, housing Durham University’s stone masons yard and offices of the Estates and Buildings Department. However, the site has an much older, and extremely significant history. As the name 'Moneyer' suggests, it was the site of the Prince Bishop’s Mint, established in 1135, by Bishop Geoffrey Rufus.

Moneyer's Garth: Its name describes its original function as well as its architectural form. A garth is a small courtyard in the centre of a building - a feature that exists behind the front block seen here.

Minting their own coinage was one of the privileges of the Durham Prince Bishops – and a significant one, as it symbolised political autonomy and brought in significant revenue. The Prince Bishops of Durham had the right to mint silver pennies, and smaller denominations – a privilege that remained until 1536, when Henry VIII had the mint closed.

Ecclesiastical (Religious) Mints and their Coinage

Durham was one of the three main mints belonging to religious establishments. The other two were those of the Archbishops of Canterbury and York, who had their coins minted with their initials.

Early coins produced in Durham carried the name of the mint “Civitas Dureme,” or something similar.

In the fifteenth century, under the Tudors, the Prince-Bishop’s initials appeared on coins minted in Durham. For example, S D (Shirwood Dunelm (Shirwood of Durham)) for Bishop John Shirwood (1485-94), and T D, for Cuthbert Tunstall – the last Bishop to have coins minted in his name.

You are in: Home » Learn » Architecture » Palace Green » Moneyer’s Garth